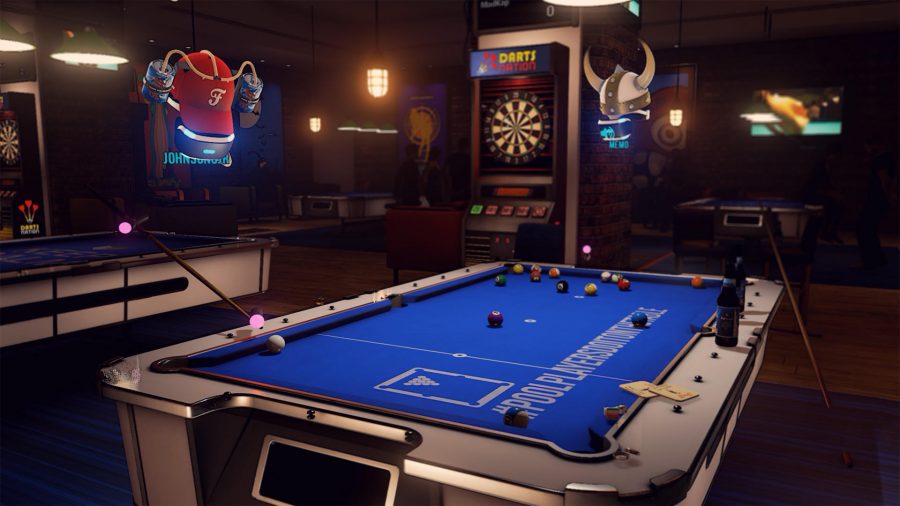 As someone who has never experienced walking into your ‘typical’ American sports bar, I felt that maybe now was the time to try it out (albeit virtually), and Sports Bar VR was the obvious choice. So let’s grab the cue, chalk the tip and break off!

When entering the VR bar for the first time, you are greeted to a dimly lit room with neon lights, empty beer bottles and a bar which seems to cater for all. This is followed by a simple tutorial introducing you to the pool table, where you learn how to hold and play with the cue using the PlayStation Move controllers, which takes a few attempts to really grasp the required technique.

Any pool or snooker players may find the positioning of the Move controllers somewhat unnatural compared to playing the real game, and will possibly take slightly longer to readjust, but it’s fairly simple to grasp and Cherry Pop Games have done a great job of making Sports Bar VR fun to play from the off.

The first of multiple games to play in the virtual reality bar is American Pool where you have the choice of playing 3, 8 or 9-ball pool, which each carry their own sets of rules. For any newcomers to pool, the game unfortunately doesn’t inform you of the rules, so a quick bit of research online is highly recommended. There are three modes to play in game, Multiplayer, AI Match and Freeplay; the latter being an obvious choice to get a real feel for the cue and have a few practice shots before playing competitively.

When you do decide to take on some competition head-to-head, the AI can be a great place to start. Decide on the level of difficulty and prepare for a shock. Even on the lowest level the AI can be incredibly hard to beat. I played roughly 20 games against the easy bot with my only victory occurring when the AI fouled by potting the 8 ball.

The computer seems to be able to do all sorts of trick shots while you are just hoping to build a small break. Whilst practise does makes perfect,either I am just an appalling virtual pool player or the AI difficulty is set far too high.

In terms of controls, the Move controllers do a really good job of tracking your movements, there were a few times I found myself hitting the balls by accident (when I had left the controllers too close to each other) which was a slight hindrance and spoilt some of my AI matches, but the overall experience was good. One downside, which does detract from the realism, is if you want to get your head down to take a long shot -don’t bother as you will find yourself within the table seeing nothing but eternal darkness.

Away from the pool table you can indulge yourself in a game of air hockey, which was the most fun and accurate in my experience. Your aim is to smash the puck into your opponent’s net and get as many points as possible. It’s simple to play and a lot of fun; just don’t stand too close to the TV as you may get a bit carried away with your fast paced jabs!

Also available to play in Sports Bar VR is darts. While you can attempt to throw your darts in the traditional way, you are better off using the auto targeting. Although this does take something away from the overall experience, unfortunately the “natural” way is hard to navigate with the Move. This mini-game feels rushed and will be something you will tire of quickly unless you are determined to hit the bullseye for that elusive trophy.

Another VR bar game to play is skeeball, a sort of slam dunk, throwing game where the objective is to throw the balls into the holes and get a high score. Sounds simple enough, right? Wrong. Achieving a high score in this game can be very tricky but it is ultimately rewarding once you master the technique.

Aside from some of the game’s annoyances when played offline, Sports Bar VR does really comes into its own when you play on the PlayStation network. With up to six players online you end up having a lot more fun with your friends. Challenge them to a game of pool, darts, air hockey or skeeball and let the mayhem commence.

Sadly, there’s bound to be someone who will randomly spawn a beer bottle onto the table or begin throwing furniture around. This can ruin your experience online if are intending to play competitively, but there are lots of players who will give you the experience you desire.

Overall Sports Bar VR can be really fun, but it can be tiresome when the Move controllers misbehave. When you do level up and complete challenges, rewards including new cues, tables and hats are unlocked, which adds plenty of replay value if you’re intent on unlocking all there is to offer. There is certainly something for everyone here, including pub sports, online play and mindless vandalism, but I’ll leave it for you decide which you prefer!