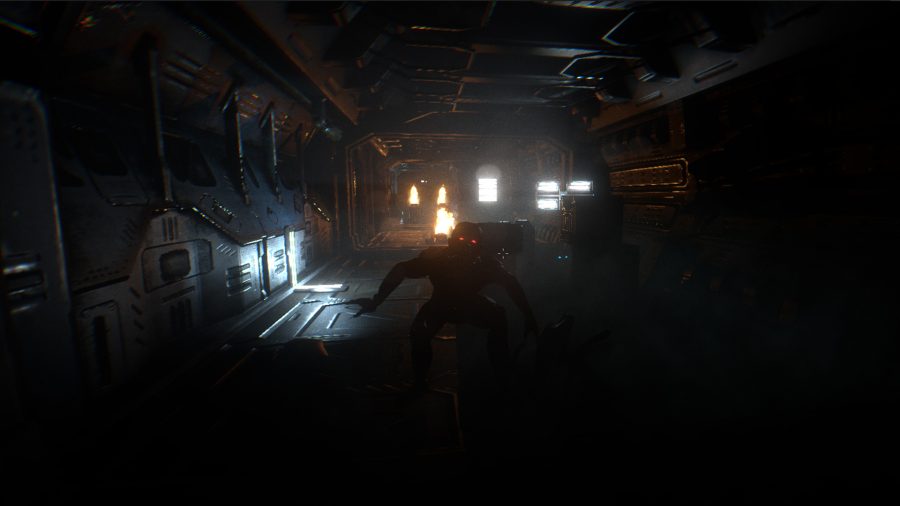 As with your typical sci-fi horror setting, Syndrome begins where you awake on a spaceship from cryosleep, drowsy, confused and knowing nothing of where you are. As soon as you step out of your cryo-pod, the ships computer informs you of your identity; Chief Technician Galen, currently on board the Valkenburg which seems to be deserted. Walking further into the ship you are contacted by a Commander Neomi who asks for your assistance to power on the ship. According to her report most of the crew are dead, or worse.

Thrown straight into the action you are tasked with closing the ships shutters as the Valkenburg heads into a meteor storm. As you search through the office floors for the shutter controllers, the logs of the crew previously present can be found scattered about. Reading these notes gives you an ominous idea what has happened on the ship. Once the shutters are closed and the darkness creeps over you, the realisation you are on your own in a stranded ship soon hits you straight in the face.

Tasked with turning on the generators you come across some of the crew, blood and guts litter the walls. Shortly afterwards you are contacted by James ‘Jimmy’ Marko, who explains the ships situation which doesn’t match Neomi’s recall of events. These two different stories combined with the many hallucinations you start to suffer from leaves you in a false sense of security not knowing what is real.

Once you meet the creatures in Syndrome you can either attack on sight or creep around to avoid conflict. If you do decide to confront these monsters you will want to try and conserve your ammunition as much as possible as resources are sparse. The creatures are not a difficult bunch to fight but there is one ‘Beast’ which cannot be defeated, so you may want to take things a little slower. There are a selection of weapons you can find around the ship varying between melee like wrenches to pistols and rifles. The melee weapons are your better choice for a more quiet approach.

The storyline to Syndrome keeps you on your feet from the very beginning and has lots of twists and turns, some you may see a mile off but ultimately it is very enjoyable. There are parts of Dead Space, Alien and Pandorum here and Syndrome combines them all really well.

Overall Syndrome is beautifully designed, has gorgeous visuals and an engaging storyline. The biggest flaws are the game suffers from many bugs, ones which required me to re-install the game many times to progress. There is also the matter of constantly backtracking through the levels of the ship which becomes very tedious. There is nothing new for the horror genre in Syndrome and a sci-fi horror fan may be disappointed with the experience.