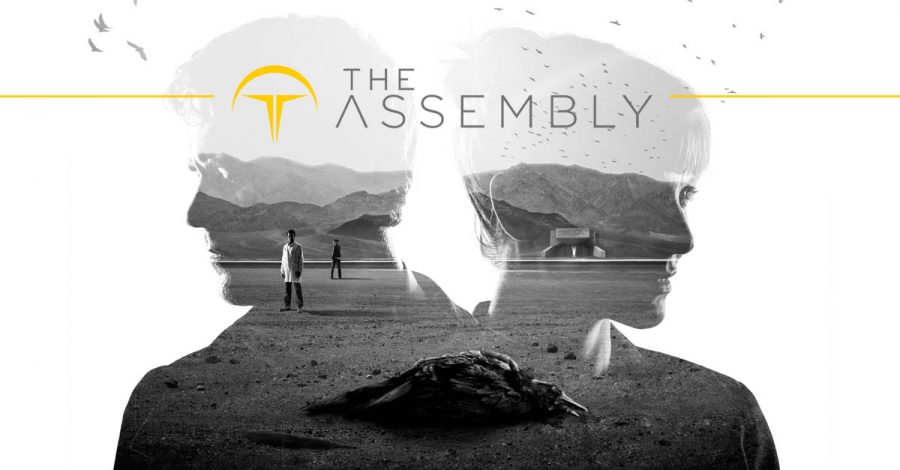 The Assembly is a first-person puzzle and adventure game for PlayStation VR that places you in the roles of two scientists, Madeleine Stone, a neurologist, and Caleb Pearson, a virologist, who both excel in their respective lines of scientific work. These two characters have their own dark past related to the secret facility, which you will be calling your new (VR) home for the next few hours.

The Assembly begins with you in the role of Madeleine as you are wheeled up a long, deserted road towards a giant metal doorway, nestled away in the desert. This strange and foreboding environment, combined with a voice behind insulting your family, gives the distinct impression that this entrance is far from welcoming. Following this mysterious introduction you take on the role of Caleb, who is in his lab. Now with complete free roam of the facility available you start exploring.

Taking the next step in the point-and-click format, nDreams have added a new spin to this classic game genre, by placing a PlayStation VR on your head. This new depth provided by the virtual reality headset really shows off what VR can bring to the current gaming landscape, though The Assembly doesn’t quite take advantage.

Throughout The Assembly, you alternate back and forth between Madeleine and Caleb, taking on tasks and solving puzzles to progress. Ranging from simply moving giant blocks to finding out the culprit of a dinner party murder, there just aren’t enough challenging puzzles to really get you excited. This is the game’s major downfall as many other non-VR games that involve puzzles can make what appears to be an easy, challenge, still fun with only basic mechanics.

Aside from simple puzzles, you spend a lot of the time wandering around laboratories listening to voice recordings and, annoyingly, reading emails. Surely we receive enough emails in the real world, so why on earth anyone would think that we would want to be doing this virtually as well? Needless to say, the ability to read emails is reliant upon whether you can adjust the PlayStation VR to focus on the text as The Assembly suffers from awful anti-aliasing.

Throughout my playthrough, walls and doorways were moving on their own due to this issue. At one point it became too much and I had to take off my headset and stop playing. (I hasten to add that this was first bad VR experience). The Assembly is built on Unreal Engine 4 which normally produces beautiful results, but it feels like it hasn’t been optimised for the current PlayStation 4. Maybe when the PS4 Pro releases they’ll be a patch that resolves this issue by taking advantage of the improved hardware?

The characters’ stories are hardly explored either, but this makes little difference anyway as the limited information that you do learn is incredibly dull. The main storyline only picks up towards the climax of the game, and that is dependant on if you decide to have a bit of fun with the the choices presented to you.

The idea of a virus outbreak and rogue scientists may sound like an exciting, albeit clichéd, blockbuster script but The Assembly takes this idea and decides not to go anywhere with it, which is a real shame. The only truly interesting character you encounter is the brains to the facility, named ADAM; this computer has multiple personalities or ‘configurations’ as he prefers them to be called. You can spend a lot of time hearing all he has to say but once again that’s about it!

Overall, The Assembly is an interesting enough tech demo for the PlayStation VR but nothing ground-breaking. There are a few moments in the game which are memorable, such as deciding the fate of a kid and your father, but nothing that makes it stand out from the crowd. Incidentally, the Platinum trophy is easy enough to acquire for all you trophy-hunters out there and should only take around four hours to complete!