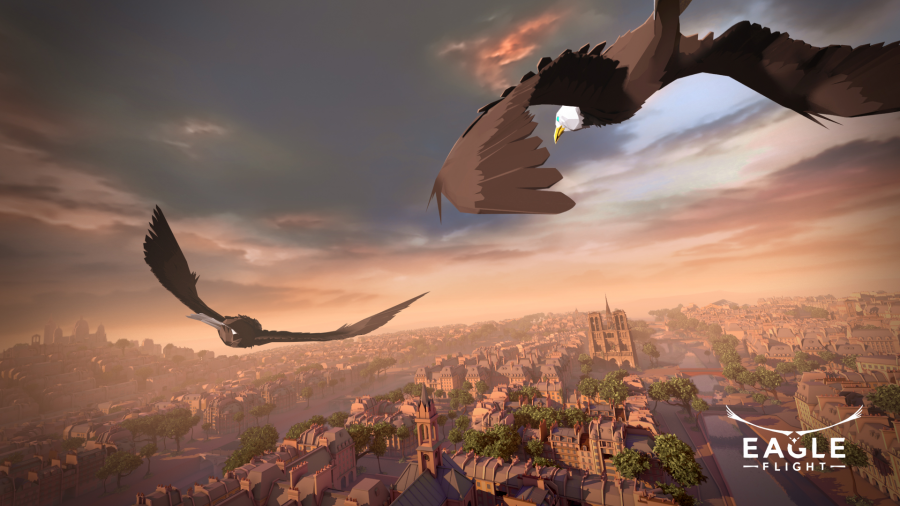 Take to the skies and fly majestically like an eagle in Eagle Flight for the PlayStation VR on PS4.

Set in the not-too-distant future, Ubisoft’s first foray into the PS VR world takes you to the now-abandoned city of Paris where dereliction reigns, Mother Nature has claimed back her land and animals roam free. Following in the life of one of Paris’s aerial inhabitants in a journey across the city, your aim is to protect your nest and find love in this quaint simulator.

Commencing in quite possibly the most appropriate manner, Eagle Flight begins with you hatching from your egg and entering into the world. After initially meeting your mother and father, you learn how to fly, build your own nest and catch dinner within the run-down city. Manoeuvring (aka ‘flying’) requires you to tilt your head in the desired direction. This somewhat unnatural movement takes some getting used to but after an hour or so, it feels perfectly bird-like!

Removing any controller manoeuvrability prevents you experiencing any nausea or discomfort whilst using the PS VR headset, making Eagle Flight a silky smooth ‘Bird-tual’ reality experience. The DualShock 4 controller is not totally neglected, although you only use it to control your speed, your attack and to protect yourself. The fun of Eagle Flight really kicks in when you are encouraged to fly around the city, dive-bomb into alleyways, smash through windows and even catch some surf. This simple, free-flight roaming alone is huge amounts of fun as this is likely to be the closest you will ever get to flying like a real bird! Just be careful not to crash as you will go splat!

Once you have had the chance to explore the city and inevitably fly to the top of the Eiffel Tower, you can begin tackling the vast number of challenges Eagle Flight has to offer. There are dozens of missions scattered across the city starting off easy and working their way up to expert levels of difficulty. Some have you dog-fighting eagles whilst others have you racing against the clock through perilous catacombs with each completed mission rewarding you with a rating of up to three stars. Achieving full marks is a highly vigorous endeavour but it is hugely rewarding as the more stars you get, the more missions you unlock. If getting full marks is not enough for you, each mission incorporates an online leaderboard where you can take on the ‘best of the nest’ across the world. The story is short and sweet but if you intend on getting three stars on every mission, the game will keep you coming back for more. Numerous collectibles are also scattered around the city for you to collect which increases the longevity of Eagle Flight.

Ultimately the game’s campaign is a glorified classroom which is designed to prepare you for the multiplayer. In this mode you compete in capture the flag with a team of up to three players with the goal of bringing back the ‘flag’ (an animal carcass) to your nest. Working as a team is essential and strategy plays a vital role. Protect your teammates with the only attack at your disposal, the eagle screech, or fire a burst of energy towards your enemies and watch them fall out of the sky. Just don’t forget to defend yourself from any incoming attacks with the aid of the eagle shield. All of these tactics are critical if you want to fly your way to victory. The multiplayer provides days of fun but I can’t help feeling that including further game modes, such as a free-for-all dog fight or king of the hill, would have improved the game’s playability. Aside from the multiplayer lacking in game modes it is an excellent arena in which to play.

Overall, Eagle Flight is one of the best virtual reality games currently available and has something for everyone – a challenging campaign, a fun multiplayer and the ability to glide and swoop around the city just like a real eagle. This is definitely the PlayStation VR game we have been waiting for!