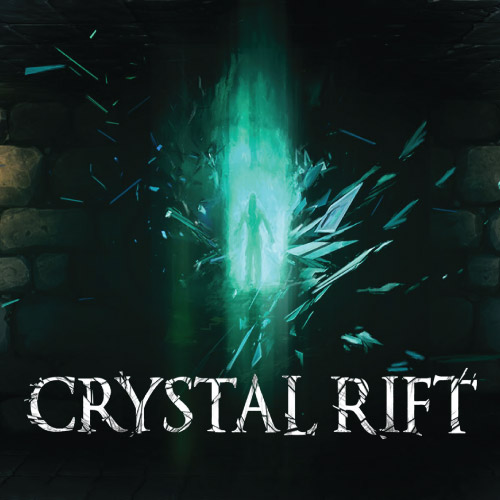 As a kid, I grew up on with games like Dungeon Master and Eye of the Beholder. Playing in a darkened room with the curtains drawn, I was able to immerse (and scare!) myself with these atmospheric, dungeon crawlers. You can therefore imagine my excitement after finding out Psytec Games Ltd were creating a brand new adventure inspired by these classics and in VR to boot! Unfortunately, as is often the case with nostalgia, the end result does not live up to expectations, which I’m afraid to say is the case with Crystal Rift.

Starting the campaign you are thrown straight into the dungeon, with its appearance being instantly recognisable to those who played similar games on the Amiga or SNES. Whilst in the PSVR, experiencing the game in 360 degrees, you get a real sense of how true to the original classics Crystal Rift has tried to be; the blocky walls, the flat textures and murky darkness that overwhelms all but the faintest traces of light.

Moving on from my trip down Memory Lane, the game works on a grid-based system that allows you to look and move in one of four directions. Movement and the altering of your view within the game are both controlled by the analogue stick on the PS4 controller with head tracking, all the while, kept at a minimum. Changing your field of view in increments of 90 degrees each time is not that unfamiliar within Virtual Reality games, but Crystal Rift somehow manages to get this simple motion completely wrong. The rapid movement is not silky smooth; and on a number of occasions the game struggled to keep up with such fast turns. This led to me experiencing motion sickness for the first time in PSVR.

After your initial steps, you acquire your only form of weaponry: the ‘Silver sword’. Throughout the game you can upgrade this with extra abilities which aid you in vanquishing your foes. However, these abilities provide you with nothing that really gives you any sort of advantage, aside from slowing down certain enemies. The combat in Crystal Rift is incredibly monotonous and does not incorporate any form of strategy-based thinking whatsoever. Every enemy follows the same scripted movement of ‘attack-stand-attack’, ‘attack-stand-attack’, ‘attack-stand-attack’ ad infinitum. The only way to defeat your enemy is another wholly repetitive movement of ‘lunge forward-attack-back step’, ‘lunge forward-attack-back step’… You get idea. This fast combat within the PlayStation VR is not a pleasant experience; in fact it’s quite possibly the worst VR experience so far. If, however, you decide to play Crystal Rift outside of VR, the view is so restricted that only the tip of your sword is visible, whereas in VR you always can see the hilt of the sword.

Aside from battling enemies, there are a number of other hurdles you most deal with to progress. These include dodging spike traps, avoiding fireballs, navigating swinging axes and evading big green blobs. Puzzles get progressively harder and more tactical as you venture deeper and deeper into the dungeon with the later levels being, by far, the most enjoyable. Personally, I would have much preferred it if the entire game comprised of these puzzles with the combat scrapped altogether.

Prizes and ‘goodies’ within the game consist solely of metal skulls. These can be found and collected by simply pulling hidden levers or by breaking through crumbling walls. When you consider that these have no in-game value, apart from enabling you to unlock trophies, this side quest feels like another attempt at adding a further dimension to the game. But unless you’re a seasoned trophy hunter, this aspect of the game it ultimately pointless. A host of notes can also be found throughout the dungeon apparently in an attempt to add an actual storyline into the game. However, this aspect feels rushed, almost as an afterthought, and does nothing to make you want to find out more. But quite possibly the worst aspect about Crystal Rift is the mundane and tedious soundtrack. I am all for repeating riffs, but when an entire music score consists solely of banging and rumbling you cannot help think that the composer, if indeed there was one, is clearly in the wrong job!

Ultimately you cannot bring the dead back to life and this is all too apparent with Crystal Rift. If Psytec Games Ltd had utilised the PlayStation Move controllers to allow the player to hack and slash, they undoubtedly could have brought this classic genre into the modern era. Disappointingly, such an opportunity has itself been thrown into the dungeon where it is destined to remain.