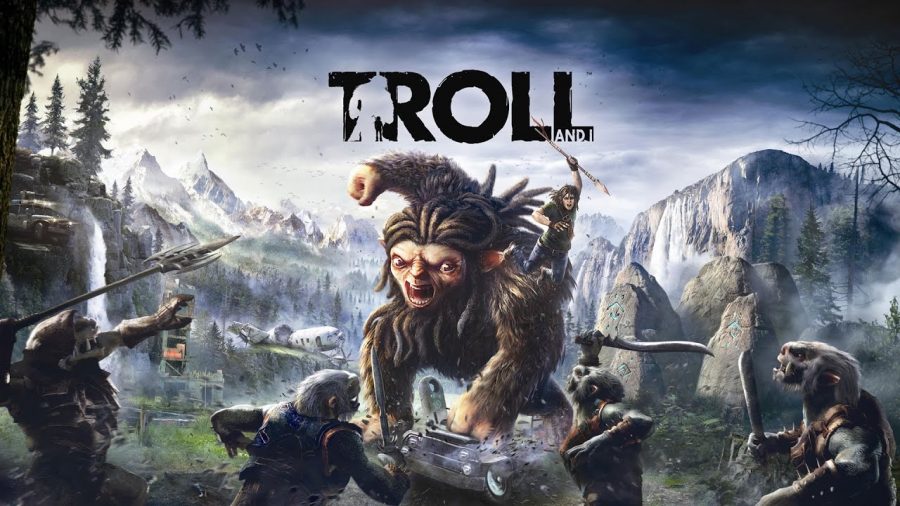 Troll and I is the first outing from indie developer, Spiral House. Set in post-World War Two Scandinavia, the game begins when a billionaire called Eugene requests the aide of a hunter to track down and kill an elusive troll for scientific research. You, however, play as a young boy called Otto, who lives in the forest with his mother and spends most of his days hunting boars.

However, this perfect life, surrounded by Mother Nature, doesn’t last for long, as one day whilst out hunting your forest home is attacked and goes up in flames, and your mother is unable to escape from the blaze. Otto however manages to escape unscathed, though only after some infuriating timed events where you will undoubtedly die over and over again before progressing. And then it’s out of the frying pan and into the fire as you are immediately attacked by goblins. But wait, what’s that under a bridge? Is it a grizzly bear? Is it a Gremlin on steroids? Is it E.T’s REALLY big brother with dreadlocks and wearing a woolly mammoth onesie? Well, no, it’s none of these! It’s Troll who’s here to save the day, and so begins the bond between man and Troll as the unlikely duo set off on a survival adventure through the woods. Depsite the interesting concept,it wasn’t long, however, before I wished Otto had gone the same way as his mother as it would have undoubtedly been less painful than the adventure about to be embarked upon.

After the initial tutorial area you are then free and able to embrace Troll and I’s full, open world. You learn about crafting items, how to track animals and even where this dreadlocked troll originates from. Unfortunately, when compared against the likes of Horizon Zero Dawn (where crafting and exploration are perfect), you can’t help but feel this title is still in its early stages of development. Crafting any sort of weapon or upgrade is very clumsy and tiresome, as the necessary resources are quite difficult to find, and some parts of the game left me with no items available to help me progress, leading me to restart the entire chapter and then conserve what resources were available.

Whereas conserving resources and items worked well in The Last of Us and enhanced the overall experience, in Troll and I, it just results in restricting playability and increasing your frustration with the game. Climbing and jumping, too, only further your annoyance with the game as each feels very slow  (like the original Tomb Raider on the PS1), and if you don’t time your jumps perfectly you end up falling to your death. With the Assassin’s Creed franchise setting the precedent in modern games for running, jumping and climbing, you can’t help but feel like you’ve taken a technological step backwards.

Controlling Otto and Troll is by no means easy as you switch between the pair and use their different skills in combat and complete tasks. Otto is incapable of fending off enemies whilst Troll seems to miss with every swoop of his gangly arms. Each combat encounter feels like a chore, a chore you are unable to escape from. And to make matters worse, most of the game’s puzzles have an element of combat included within them, so solving each puzzle only prolongs your agony as you end up fighting off never ending swarms of enemies. Some enemies even become invincible! Whether this is a ‘quirky’ feature or just a glitch I never did find out, although I presumed the latter as Troll and I is plagued with bugs and glitches. But if you’re one of those gamers who enjoys being stuck inside walls, trees, rocks and even trolls then this is, most definitely, the game for you! If you are however one of those less tolerant people who like their games to run smoothly, I’d suggest against playing Troll and I as random game crashing bugs also ruined my experience, so much that my PS4 nearly went hurtling out the window!

As you progress further into Troll and I (this is assuming, of course, you have the patience to carry on), the storyline just seems to dry up from its already ‘dehydrated’ state. Fight off the bad guys, fight off some bigger bad guys and then walk off into the sunset with your oversized Gremlin, I mean, Troll. Not once did I feel a any sort of connection with the characters in this game, in fact I often hoped the hunter (who is barely seen) would forget about chasing after Troll and hunt me down instead just to put me out of my misery. Although the unforgivable lack of a map in an open world game likely ensured that the hunter would never find me as, like me, he was probably completely lost too!

Visually, the Troll and I is also decidedly average and will certainly not be winning any awards for its appearance, contrary to what the trailers may have led you to believe. Whilst merrily striding through the woods on your way to the next cavern or snowy hill top, you begin noticing how all the foliage pops into view as you walk around. Team this up with low frame rates and the end result are graphics that would not look out of place on the PS2. However, you probably won’t notice any of these things as the camera angle is consistently fighting against you, something I found particularly infuriating. On the bright side, it must be said that the soundtrack is actually quite pleasant to listen to, consisting mainly of a string-led musical score; it’s just a shame that it was not exploited more within the game.

Overall Troll and I is an awful game that should be renamed to “Prepared to be Trolled”. I died more times than in Dark Souls, so many times in fact that I just wanted my misery to end as quickly and as painlessly as possible, but alas it dragged on and on and on. And on! The ambition from Spiral House was most definitely here when it devised the concept for Troll and I, but it’s clear that time, and probably funds, ran out before it could create the epic adventure that it envisioned. However, to now charge £40 for a game that gets even the basics wrong is scandalous. Consequently, I would not recommend Troll and I! I just hope this particular troll goes back under its bridge, hangs its dreadlocks in shame and never emerges again.