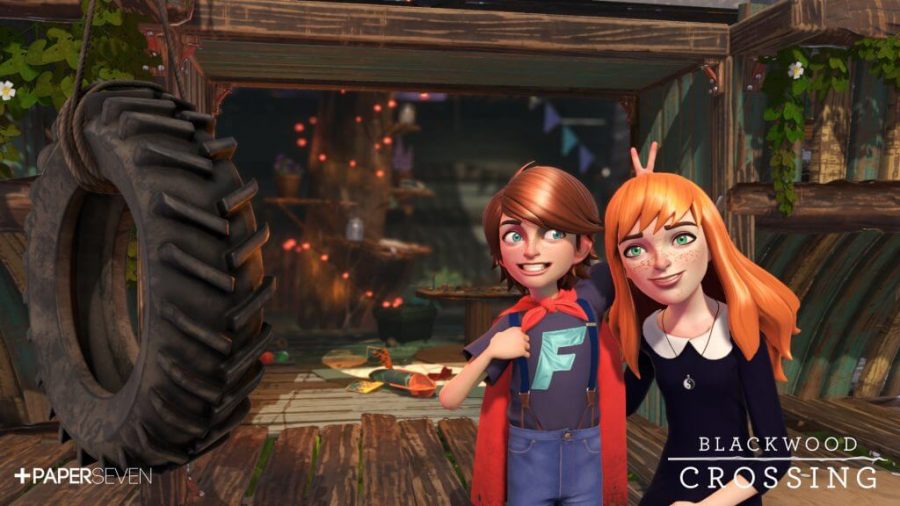 Blackwood Crossing tells the story of two orphaned siblings; teenager Scarlett, her younger brother Finn, and their last train ride together. Surrounded by mystery, magic, and tears, Blackwood Crossing is a powerful story driven experience now available on PS4, Xbox One and PC.Taking on the role of Scarlett, the game begins with you asleep and on board a steam train racing through the countryside. Hearing a voice cry out for help, you leave your compartment to follow the sound. Your brother Finn jumps out to scare you from a storage cupboard, then speeds down the carriage laughing. You give chase and Finn proceeds to play more cruel games with you. After a few short rounds of “Simon Says” and hide-and-seek, you and Finn find yourselves being consumed by strange black goo, you struggle to free yourself and are swallowed into darkness, but then you wake up in the train compartment again. It had to have been a dream… Hadn’t it?

After your recent nightmare, you decide to take a walk, and explore the seemingly empty train. Controlling Scarlett is rather easy as there are no real challenges within Blackwood Crossing, though there are occasions where you choose how to respond to dialogue, be that nice, neutral or negative. Controlling Scarlett is quite slow but nothing compared to similar games in this genre. Wandering through into the next carriage you meet your grandparents, but for some unknown reason they are both wearing masks and cannot move. After conversing with them, they puff into thin air. You think that’s weird? As you step foot in the next carriage, you are surrounded by even more static people wearing masks, from lions and pigs, to rabbits with towering ears. This odd bunch of characters each has a story to tell and the puzzle solving element of BlackWood Crossing has you simply listening to their conversations in sequence to progress. This strange set of events doesn’t end there though, after completing this challenge, you awake again on the train in the same spot as before. This is all starting to sound a bit like Inception right?

Each dream (or reality?) gets even more bizarre, but the further you chase the rabbit down its hole, the more you uncover about the masked characters. I instantly got sucked into this whimsical tale, and the less it made sense, the more I wanted to uncover the secrets of Blackwood Crossing. As you progress, the game moves outside of the train carriages, and introduces you to vibrant woodlands, lakes and caves. As you explore these environments, piano pieces play, treating your ears to one of the best musical scores so far this year. Blackwood Crossing has its own unique sound and style, and visually it looks similar to current Disney animated films, from the cartoony backdrops to crisp characters models. As you explore the various areas of your odd dreams, the story between Scarlett and Finn deepens revealing more than just a heart-warming story into a full blown tragedy. This game is designed to play with your emotions, and believe me it does. You may even want a box of tissues for later on!

Aside from the many twists, turns and puzzles, if you are eagle-eyed you may notice the many humorous references to film pop culture hidden amongst posters dotted throughout the game. The mood is set with a stunning musical score, adding a tremendous amount of depth and poignancy.Overall, Blackwood Crossing is a compelling and heartfelt journey through love, loss, and the importance of letting go.