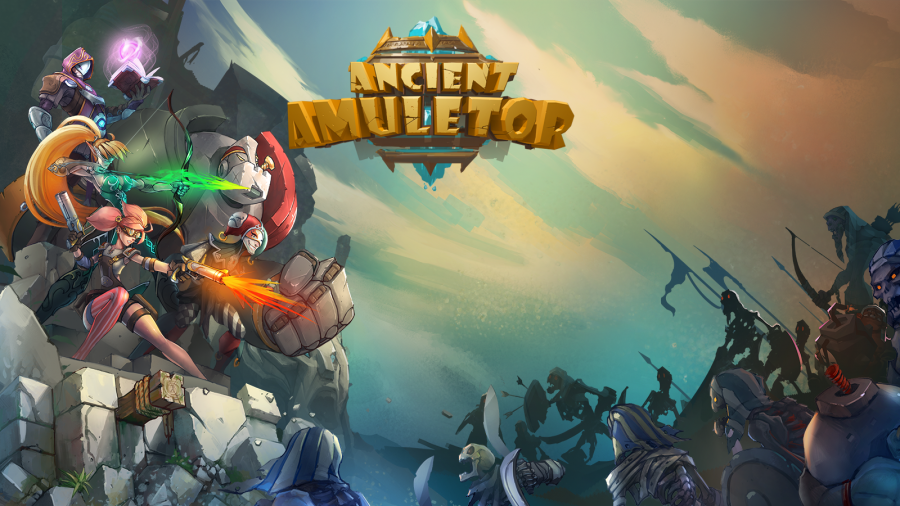 Tower defence games, oh how we love and hate them simultaneously and in equal measures. The love of getting to wave number 48 without letting a single enemy escape immediately followed by the hate of wave 49 casually strolling through your defences as if they were not there! ARRGHH!!! Wel, Ancient Amuletor provides you with the opportunity to drive yourself crazy with tower defence-related frustration once again, but this time, all within virtual reality, and all in first-person mode.

Developed by TiGames and exclusive to PSVR, Ancient Amuletor sees you fighting off wave after wave of skeletons, mages and warriors who are all intent on destroying precious crystals (that you must protect) which are scattered throughout each of the game’s many levels. Unlike many other tower defence games where you often take a relatively passive role in the combat, Ancient Amuletor places you in the first person role of a hero, who you actively control during levels. You have a choice of four heroes – Archer, Gunner, Mage and Puppeteer – each with their own strengths and weaknesses.

The archer, for example, can cause heavy damage with a single arrow but also suffers from a slow rate of fire (depending on how fast you can draw a bow). In comparison, the gunner and mage can fire their projectiles incredibly fast but inflict far less damage. Controlling your hero is entirely reliant on using the PlayStation Move controllers with drawing your bow to casting a spell all successfully achieved by re-enacting appropriate movements, all of which work incredibly well and feel perfectly smooth and natural.

Rather than in most tower defence games whereby enemies typically spawn from one or two fixed locations, enemies in Ancient Amuletor spawn at various points around each map, emerging from dark portals and clambering out of holes in the ground. At the beginning of each round enemies are scarce, entering the level from only a small number spawn points. However, as each wave progresses, more and more spawn points become active across the map, creating a level-wide procession of enemies.

An additional dynamic of Ancient Amuletor that aids you in defeating your foes is that your hero is not static; you can actively move around the various platforms located throughout each level, thereby creating a better vantage point from which to attack. Switching from one platform to another is simple and is achieved by pointing the Move controllers at your chosen platform and then teleporting over. As the hordes of enemies increase, you will find yourself constantly moving your hero around the level to protect your crystals, which, all in all, keeps each level tense and fun but most importantly engaging, an aspect often missing from traditional tower defence games.

As for the pace of the game, each wave consists of varying speeds of adversary’s and – just as long as you vanquish enemies fairly fast – the game doesn’t provide too much of a challenge. There are also a number of bosses to defeat along the way which increases the difficulty, but nothing that cannot be defeated first time. With future updates, hopefully we will see a broader range of enemies and challenges to fight against.

Currently, there are only four playable levels and heroes but more maps, characters and weapons are on the way and due to be released soon, hopefully as free updates rather than paid for DLC. Each level can, however, be played multiple times and with each hero, adding to the game’s replay value. You can also take your game online with up to four fellow heroes to battle enemies together. Irrespective of the mode you choose, both the single and the multiplayer provide a vast amounts of enjoyment.

Overall, Ancient Amuletor is a lot of fun, but currently lacks content and depth. Having just four playable levels prevents this title from being a ‘Must Have’ virtual reality experience. Hopefully though, when we re-visit this PSVR exclusive in a few months’ time, the content updates will warrant this game’s price tag.