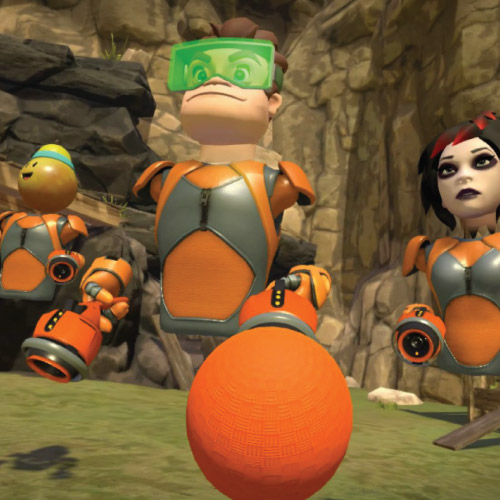 Back in school, I played dodgeball all the time and have very fond memories of the sport. This may be due to the fact that I loved throwing a big rubber ball at the wimpy kids who would normally find some way to get out of gym class. Now this may sound cruel, but this was dodgeball after all; it’s in the name. Thankfully though, for all those kids who vowed never to set foot in a dodgeball arena again, or people like me who thrived on firing big objects at people, developers BigBoxVR has developed its own take on the ball bashing sport. Virtual Reality meets Dodgeball with guns: sounds like a great combination right?

While not technically guns, Smashbox Arena places two weapons in either hand that resemble something similar to a gun. Their sole purpose however is to allow you to move around. and fire balls from them. Moving around the game is accomplished by warping between spots. You simply fire a mini-projector out of your gun and onto the ground, and your character then warps over to the new spot and you can begin to look around. Moving and looking takes a little while to get used to, though, as your left controller only takes you left, while the right one only goes right. Now this may sound perfectly normally, but having the ability to move either way on both controllers would have felt more natural to me when compared to other VR titles. Obviously moving around is not the only thing to do in the game, since firing balls at your enemies is where the real fun begins!

Smashbox Arena places players into a host of different arenas, all scattered with hundreds of balls. The aim of the game is simple: Pick up a ball and fire it at your enemies. If you get a direct hit, that eliminates them from the round, but be sure to duck, dodge and weave as the same thing will happen to you. Each game consists of five rounds with two teams of three battling it out for victory. Each round is frantic and quick paced, keeping you on your toes at all times. If you stand still for too long, you will be out!

The game also features a range of weapons you can utilise in each match. Whilst you can pick up and fire any of the normal balls, you can make use of the more fun and crazy artillery. With the likes of grenades, snipers, flaming boulders and homing missiles all available in your arsenal, Smashbox Arena feels more like Worms in Virtual Reality (This needs to happen, TEAM17!). Each of the special weaponry is hard to avoid and can only be dodged if you get out of the way quickly enough. The normal balls, however, can be caught in mid-flight if you are fast enough, and then be fired back. Just remember not to attempt this with a grenade or a missile!

As of this review, Smashbox Arena currently features a short story mode with varying difficulties and an online mode. The story mode attempts to encapsulate a story, but falls flat on its face, as there is no need for one and is easily forgotten about whilst playing. As you play, harder modes are unlocked, which provides some replayability to this title, but nothing that will keep you clinging on. The online mode is also plagued with issues, the main one being matchmaking. Each time I tried to join or create a lobby, there were no other players to be found; maybe, like me, they just couldn’t connect? Hopefully a future update will rectify this problem. This is a game that has potential for an online community, if the developers keep it updated.

Overall Smashbox Arena is a fun PSVR title that has some great gameplay but can be short-lived. The online mode has the most potential if BigBoxVR could provide an update to resolve matchmaking issues. If you enjoy dodgeball (or not) and want to experience this fun sport without any of the pain that comes with it, Smashbox Arena is definitely the game for you.