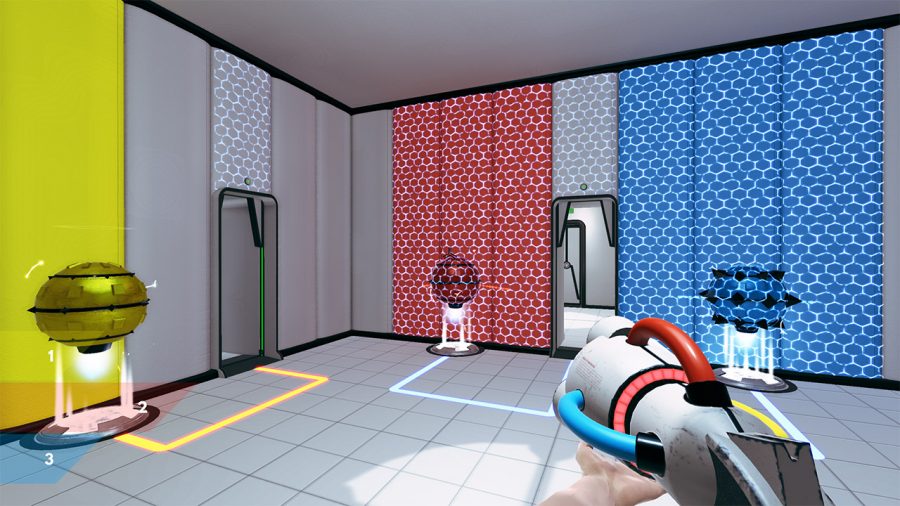 Following the brilliant Portal 2 on the PS3, have you ever felt cheated over Valves’ frustrating lack of a third game in this particular franchise? If the answer to this question is, “Yes!”, then you may find some comfort in the knowledge that many indie developers are out there creating very similar experiences of Valves’ fantastic games. Admittedly, there have been some rather poor attempts over the years, but the latest release by Pixel Maniacs, titled ChromaGun, seems to get everything just about right. The question is: ‘is this the replacement to Portal that many of us have been waiting for?’.

Set in the first person and taking on a very similar style to its much-loved counterpart, ChromaGun places you in a testing facility with the task of testing out a new gun, (un)surprisingly named the ChromaGun. Essentially a glorified paintball-esque gun, this weapon is capable of firing paint, allowing you to splatter the walls and floors of the facility in a range of different colours. Whilst altering the interior décor of a test chamber may sound like fun, your real task is to solve puzzles by only using paint.

Each of these puzzles sees you manipulating big floating balls known as Worker Droids by painting them, moving them around, and then placing them over certain objects. Your ChromaGun is capable of painting an object any of the three primary colours – red, blue or yellow – and if you subsequently mix two of these colours together you can create orange, green and purple.

In order to get a droid moving, you simply paint it one of the six colours at your disposal, then paint a section of a wall the same colour as the droid you wish to move and the droid will head towards the painted panel. Just be careful not to continue to mix the paints as objects will eventually turn black and become unusable. It should be emphasised that the ability to use a range of colours isn’t just a superficial attempt at ‘brightening’ up the game, so to speak; it becomes incredibly handy as you progress through the game when you are tasked with solving complex puzzles, having many colours to use helps out a lot.

You’re probably thinking that all of this sounds very easy, right, simply painting droids and walls? Well it really is! The hard part comes when droids are locked to a specific colour or when one of them wants to kill you. These killer droids are particularly troublesome as they are attracted to you rather than the colour of a panel, so avoiding them whilst solving a puzzle can be rather difficult.

As you get further into the game, more obstacles are added to each level, which increases the difficulty somewhat. Other aspects of the game that pose further challenges are electrified floors, which kill you if you step on them, unpaintable walls and automatic locking doors which can be extremely frustrating when you have a killer droid chasing you down. Thankfully, ChromaGun takes you into the more difficult puzzles at a steady pace, keeping the entire game very fun and steady paced.

ChromaGun is not a particularly long game with only a few hours’ worth of gameplay. There are many Easter eggs and secrets to look out for (keep an eye out for the cake!) which prolongs the game time and if you are a trophy hunter you can easily acquire the platinum trophy in less than three hours, depending on how good you are with puzzle games.

Overall, ChromaGun is a charming puzzle game with all the wits and humour of its bigger ‘stepbrother’, Portal. Ultimately, if you are puzzle fan then this game is sure to put a smile upon your face as you explore the many chambers of Aperture scie …. I mean Chromatec science labs.